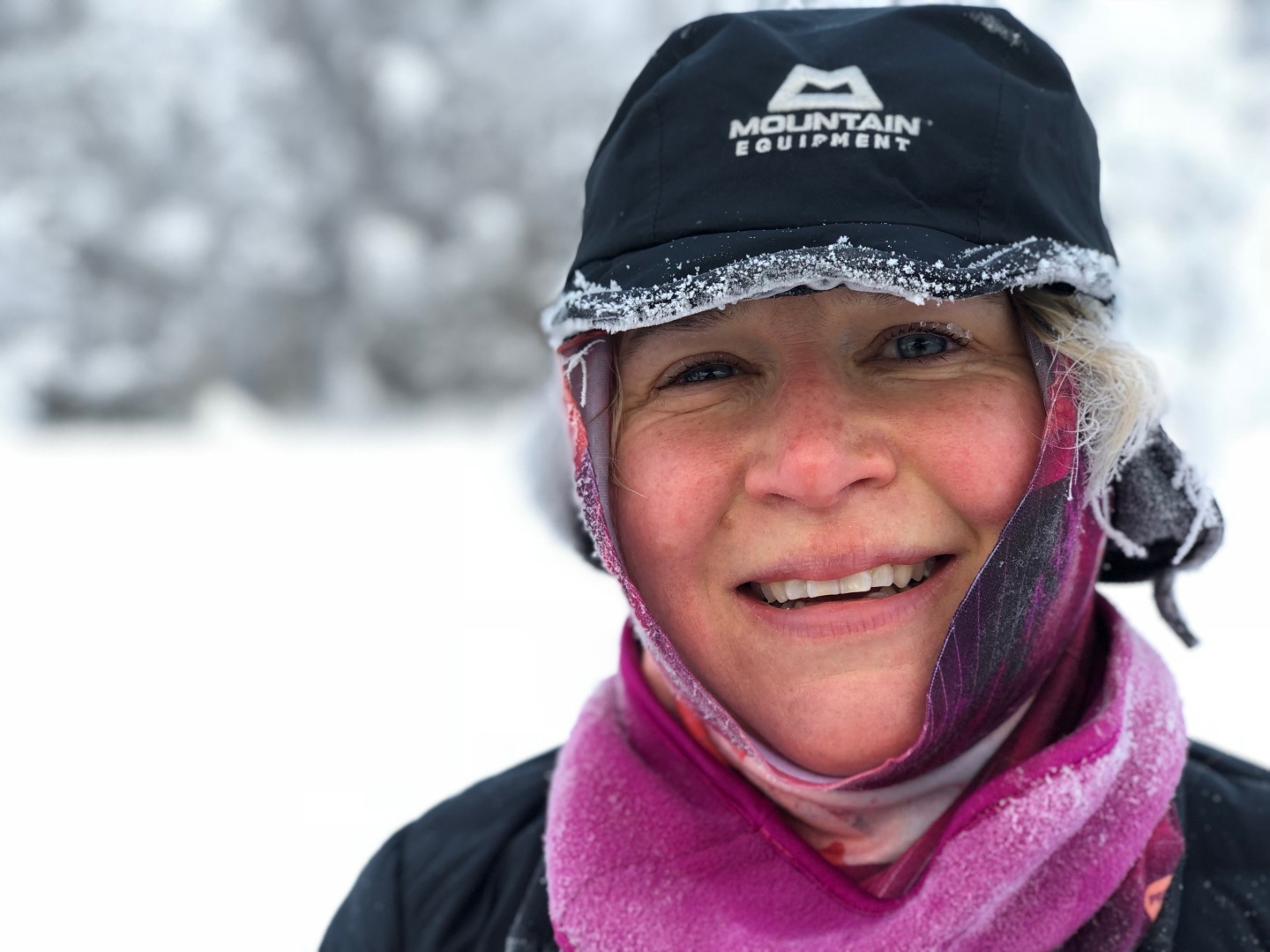 Quote about Greenland from Miss Smilla’s Feeling For Snow by Peter Hoeg: “It’s winter, the wind is blowing, and it’s terrifyingly cold.  When women need to pee, they have to light a Primus under a blanket to be able to pull down their trousers without getting frostbite instantly.”

It was the last day.  With all the dramas of the previous 2 days, a 12 km walk to the finish line was always going to feel relatively relaxed.  What could go wrong? Nothing.  No drama, nothing to report, just one foot in front of the other.  Except….

Les was in the lead, I was two thirds of the way back, Lee and Rick were bringing up the rear (a pun… but you won’t know why yet…)

Also, it had warmed up a bit, only about -20.  Positively balmy.

In fact, my legs were beginning to fell very hot indeed.  Oddly hot.  The sort of hot that is created by the friction – say – of wet thermals rubbing together between your thighs with every step you take (note: anyone whose thighs don’t rub together when they walk can stop reading now.  It’s unnatural.  That’s a fact…)

Why were your thermals wet, you ask?  That is a damn good question.

While still walking and keeping up with the pulk in front of me, I had my big mitt off, my liner glove off, my hand down my trousers, trying to confirm that it a. was wet and not just some other issue that would create the same sensation (I couldn’t think what this might be…), and b. (did I warn you this post might get graphic?) trying to smell it to see what it was.  Because my first thought was ‘I’ve wet myself’.  This was not a pleasant thought.  Luckily I discounted this based on the fact that I didn’t recall feeling like I’d wet myself (even in the cold, you can tell when you’re weeing), with the smell confirming this conclusion.  So far so good.  My next thought – still walking, one foot in front of the other, don’t fall behind, keep going – was even more shocking than wetting myself.

Because I’ve felt that ‘I don’t think I’ve wee’ed but it feels like I wet myself’ sensation before: when my waters broke with my first born.  But no, I was confident that I wasn’t pregnant and this definitely was not amniotic fluid.

And then it dawned on me.  A memory darted into my head from one of the information sessions months ago, back in Edinburgh.  Lee, our leader, had said the following:

“If conditions are really cold, your drinking water will freeze.  So fill your water bottle up in the morning with water that we’ll boil over the fire, then pop the bottle into your trekking jacket.  It will keep your body warm, and stop your water from freezing.  Just make sure you tighten the lid.  The last thing you want is it leaking”

“The last thing you want is it leaking”

“The last thing you want is it leaking”

Lee didn’t say this repeatedly, but as I kept putting one foot in front of the other, this line was reverberating in my head.

I knew before I reached into my jacket.  My bottle was lying on its side (as it had been on days 1 and 2) being held inside my jacket by pulk belt, and was leaking water.  I stood the bottle upright, tightened the lid, and swore silently but vehemently under my breath.  But I kept walking.  Why?

Because two things were working in my favour.  The water was still very warm, and the friction was keeping it so (thank god for rubbing thighs!!).  While I was moving I was staving off hypothermia.  Once I stopped, I would get cold quickly.  Very quickly.

I needed a plan.

Of course, I didn’t need a plan.  I could have reported my issue to the guides and they would have had to solve it.  But something – resilience? independence? pride? embarrassment at my own mistake? – meant that that didn’t even cross my mind.

We had been briefed on the dangers of hypothermia.  But we’d also been briefed on how to avoid it: stay dry, don’t get too cold.  Given I wasn’t – yet – cold, there was a simple solution: change into dry clothes.  On the track.  In -20 degrees.

So make a plan.

First: what do I need?

Second: where is it all in my bag?

Third: how can I get changed as quickly as possible?

Fourth: what help will I need?

With answers to all of my questions, I took a deep breath and sent the message up the line to the lead guide.

With the message working its way forward like Chinese Whispers at a kids’ birthday party I had stopped, discarded the offending bottle into my pulk (no way I was going to carry water in my jacket again), removed my big mitts (carefully placing them so they wouldn’t fall in the snow), unclipped my pulk belt, opened my pulk bag, and identified the ‘dry bag’ with my dry clothes.

I assessed the clothes I was wearing, hoping it was just thermal bottoms and walking trousers needed.

Les arrived from the front.

“My water bottle leaked.  I need to change.  Can you get one of the women to help?”

“OK, and I’ll move the group further up the track to give you some privacy”

To be honest, privacy wasn’t high on my list of concerns.  Hypothermia was up there.  Frost bite not far behind.  Privacy??  I’ve been through childbirth twice.  You lose your sense of privacy after such events…

But he headed off with his tasks.

Lee and Rick arrived from the back of the line.

“My water bottle leaked.  I need to change.  Hold this”

And as the line moved forward, those behind overtaking me, Joyce – my fellow walker and saviour – walking in the opposite direction back towards me on Les’ instruction, I started passing dry clothes to Lee and Rick.

Notice anything missing? No idea where my spare underpants were.  And to be honest, this was the least important item as far as ‘hypothermia-prevention’ was concerned.  So I wasn’t worried.

“No spare undies” I declared to an astounded looking pair of male guides, “But then, I’ve always wanted to go commando in the arctic”

The four of us were on our own.  Les embraced the ‘privacy’ issue to the point of talking the group out of our sight.

And I turned to Joyce.  A small mention for Joyce here.  She had no idea what she was getting into when she was asked to ‘head back and help Sarah out’.  Joyce and her husband Gordon are a semi-retired couple who have lived all over the world, following his job, and going on adventures on their travels.  Mt Everest base camp.  Exploring India.  You name it.  But I bet she never thought she’d be confronted by a naked Aussie in the Arctic.  And she simply took it in her stride.

Remember, all these things had to happen fast.  I could already feel the wet clothes getting cold.  There was no time for unnecessary modesty or chat.

So with Lee and Rick facing the other way but holding out dry clothes like arctic clothes horses, we got started. I whipped off my top half and, like a surgeon saying ‘scalpel’, I said ‘thermal top’.  Lee held it out behind him and I put it on.

And I was rubbing my upper half getting body warmth to heat the clothing.  So far so good.

But we all knew that was the easy part.

Because for the lower half, my boots needed to come off.  I couldn’t stand in the snow (remember the toe frost bite scare?  That would have been nothing…)

But I had thought this through already.  And this was where Joyce came to the fore.

My pulk bag was still open.  I sat on the dry bag inside, which was holding my sleeping bag.  I unlaced my boots, pulled down my bottom half to my keens, put my feet in the air (luckily my socks had escaped the waterfall) and asked Joyce – bless her – to pull the trousers, thermals, and underpants off.

Jesus it was cold.

All having gone so well, everyone – subconsciously – aware that the danger had been averted, it transpires that I hadn’t let Lee and Rick into the detail of my awesome ‘changing’ plan.  In particular, I hadn’t explained the “thermals and trousers half up, boots on, then stand up before pulling everything up” detail.

So, on being aware of me standing up and assuming that I was done, they turned.  And, fully expecting to see me newly dressed, instead they caught a sight of my chilly, bare arse.

Again – I couldn’t care less.  I was in dry clothing, getting warm, and lacing my shoes up ready walk on.

But either to relieve the perceived embarrassment or simply stating an irrefutable fact, they declared my arse to be ‘tight’.  I’m pretty sure it was the latter.

Joyce headed back to get her pulk and join the group, and I did the same after pulling on my gloves and mitts, and clipping up my pulk belt.

I swear from calling a stop to the trek, to starting on again in a full change of clothes, it was less than 5 minutes.

“Has anyone ever done a full change so quickly on the actual trek before?” I asked Lee.

He laughed.  “No one’s ever had to do a full change out on the trek”.

I feel part proud of how I handled the potentially serious situation, and part stupid for such a rookie error that caused the drama in the first place.

Olivia tells me that later that night in the bar the guides were talking about how impressed they were with how quickly I solved my own issue.  And I realised that mostly I do feel proud of that.  For not panicking.  For waiting ’til I had a plan.  For changing so quickly.  And for getting back on the trek again.

I’m glad they were impressed with my actions.

But I’m pretty sure that mostly, they were just impressed with my arse.

This is my last planned arctic trip post – although if something else occurs I may well change my mind 🙂   If you have enjoyed my posts and would like to donate to the amazing charity, CHAS, which raises money for children with life-limiting illness and their families across Scotland, please click here for Olivia and my justgiving page. I hope NOT ONE of you ever needs CHAS’s help and support…. and I also hope that if you do, enough money has been raised so CHAS is there for you…

I’m an Aussie. Going to the arctic. Did you get that already?

And I’ve decided Scotland is just not quite cold enough.